MINNEAPOLIS, MINNESOTA, February28, 2019–Miami Valley Communications Council(MVCC) in Centerville, Ohio is a municipal communications and technology organization that represents eight member cities in the area, and holds affiliate agreements with 23other Miami 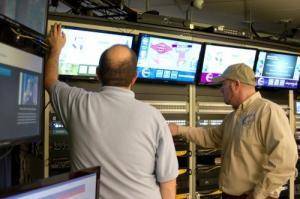 Valley cities. Upgrading its master control and playout infrastructure to high definition while replacing decade-old legacy equipment, the council selected the Cablecast Community Media Platform from Tightrope Media Systems as the foundation of its enhanced operations.

MVCC was formed in 1975 to oversee cable television franchise agreements, manage the operation of the council's cable access
television channels, and lead intergovernmental projects designed to strengthen communications between member cities and their citizens. The council operates four PEG channels –two government channels, one educational access channel and one public access channel –while offering state-of-the-art production facilities, equipment and training to residents of its member cities.

While limited to broadcasting in SD for cable distribution, MVCC had higher ambitions for its online presence. “We wanted to upgrade to HD for our online VOD and eventually our live streams,” explained Nick Evert, MVCC’s chief engineer. “We also wanted a system that would simplify our file-based workflows and integrate better with our website offering.”

MVCC purchased the Cablecast Broadcast Automation software and two quad-channel Cablecast Flex 4 playout servers, configured to provide one recording input and one playout pathway for each of the council’s four cable channels. A Cablecast Pro VOD server automatically creates on-demand clips of the station’s programs, which are then delivered to viewers through the cloud-based Cablecast Reflect service. Four Tightrope Carousel systems drive independent bulletin boards on each channel. Supplied by systems integrator iVideo Technologies (known at the time as Industrial Video), the new installation went live atMVCC in September 2018.

In choosing the Cablecast platform, Tightrope’s expertise was as important to MVCC as the solution itself. “The number one thing for myself and our recently-retired programmer was the background of the company,” said Evert. “Tightrope staff all seem to have a good knowledge of the PEG channel world, with many of them coming from a PEG background. Their receptiveness to the particular challenges of a government-run media center was really appealing.”

Cablecast’s browser-based architecture was similarly attractive. “Unlike our previous system, people can now be working simultaneously on various machines over the network at the same or different times, without being tied to a specific workstation,” Evert explained. “Plus, I don’t need to keep updating software versions on multiple machines to stay current.”

Beyond its browser-based flexibility, the operational ease of Cablecast’s user interface itself has earned Evert’s praise. “With our previous system, a lot of functions were counter-intuitive and confusing,” he said. “The Cablecast interface is much more intuitive and modern, and you get a lot better feedback from the software when you’re working.”

Cablecast’s elegant media handling capabilities save MVCC staff valuable time that they can put to better use. “With our old system, we had to FTP files around a lot, moving them to and from a NAS,” recalled Evert. “With Cablecast, we have all of our media live on the server. Instead of spending time queuing things up and on routine operational tasks, employees are freed up to do things like developing better bulletin board graphics and polishing things up a little bit more.”

Cablecast’s tight bulletin board integration has brought similar gains. “The schedule integration benefits are huge,” said Evert. “With our old system, staff would get an email or printout of the schedule, and need to retype it into our bulletin board software. Now as soon as we’ve scheduled the show, it’s handled automatically, completely eliminating that work.”

In addition to the Cablecast platform itself, Evert has also been impressed with Tightrope personnel. “I can’t say enough about the receptiveness that they have to new ideas and features,” he praised. “You work with any system day in and day out, inevitably you’ll have ideas of something new you wish it could do. Not every manufacturer will truly listen to your requests and discuss them with their development team. I think that’s huge.”

MVCC’s future plans include adding Cablecast Live systems for HD live streaming, and updating the video content area of their website using Cablecast’s dynamic, turnkey “public site” web publishing tools. But in the meantime, the platform continues to deliver the benefits the council sought. “Cablecast has simplified our master control workflow, and allows our staff to allocate more of their time to refinement of our channels,” summarized Evert. “It is a solid, all-in-one kind of solution, which is exactly what is needed for a PEG facility like ours.”