On May 5, 2022, the Miami Valley Communications Council (MVCC) invited the public to see what community access television is all about - and the community responded. Nearly one hundred visitors stopped by from 6:00pm to 8:00pm for a tour that showcased all the technology available (for free) to future media creators, television producers, and podcast hosts.

In addition to seeing how four television channels are programmed and operated, tour takers were able to operate cameras for a live two-hour performance by the Springboro Community Theatre, and go behind the scenes on producing a show of that magnitude. Cablecast live on CATV991 and EATV21, the Springboro Community Theatre presented an evening of music, singing, and improv comedy. Viewers who missed the show can catch the stream at: http://vod.mvcc.video:8080/CablecastPublicSite/show/11823?channel=4.

If you wanted to be part of a mobile production truck team, make a podcast, learn video editing, or see all the equipment available to check out (for free), the staff of MVCC demonstrated these options as well. Along the way, visitors heard about the key role MVCC plays in regional government projects, including the GATEway Fiber Network project which will be a valuable modern infrastructure tool for economic development initiatives.

An all-new series of classes designed to get media creators quickly creating television and podcasts was also unveiled that evening. Want to see if making television is for you? Try the free orientation class! Go to www.MVCCclasses.com for more information and a selection of workshops available. In addition, nearly all advanced training workshops are available for free. For questions or more information, contact Liberty Lord at llord@mvcc.net or (937) 438-8887, or send an email to volunteer@mvcc.net. 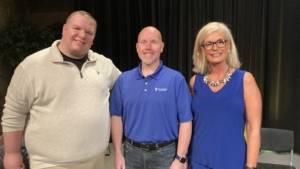 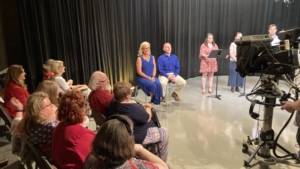